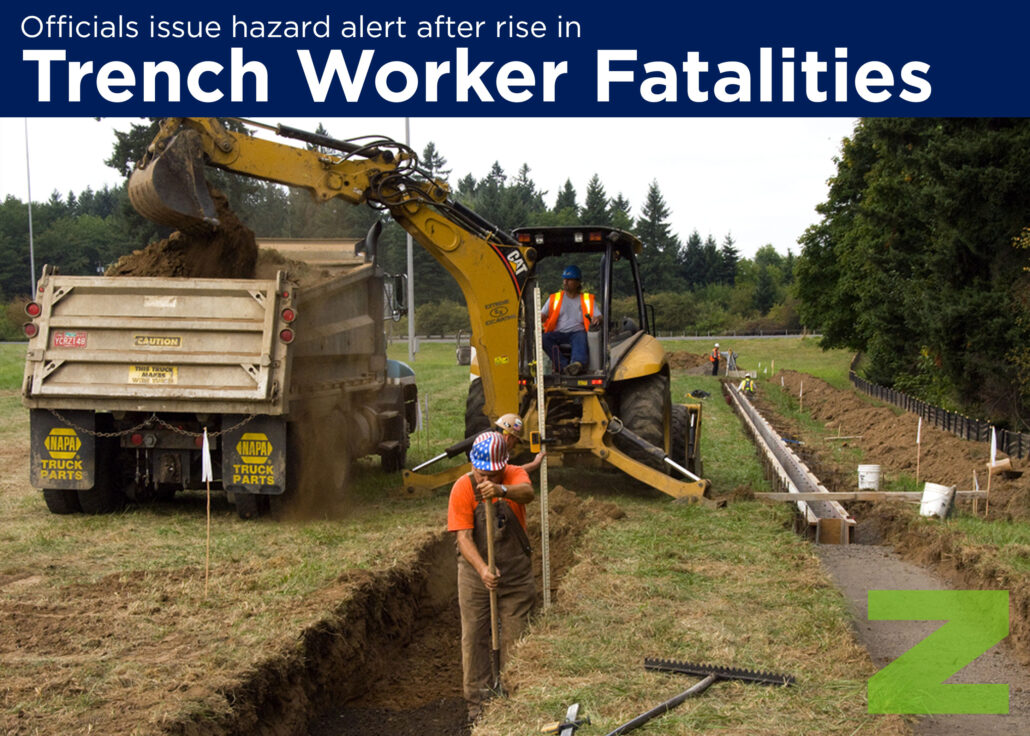 • The Kentucky Fatality Assessment and Control Evaluation (FACE) Program has issued a hazard alert about safe trenching operations after an “alarming” increase in trench-related deaths in Kentucky, according to Safety + Health.

• FACE offered tips for protecting construction trench workers, including regular inspections before shifts and after potentially hazardous events like rainstorms; protective measures like shoring and benching for trenches between 5-feet and 20-feet deep; professional design for trenches more than 20-feet deep; spoils and material storage kept at least 2-feet from the trench edge; safe egress from trenches no more than 25 feet from workers and training of employees to recognize hazardous trench conditions.

• OSHA reported that the 23 trench fatalities that occurred in 2016 were more than for total deaths for 2015 and 2014. Kentucky saw three trench-collapse fatalities from June 2015 to December 2017.

Trenching and excavation are two operations of OSHA’s construction-industry safety focuses. According to the agency, they are among the most dangerous activities that take place on a construction site, primarily because of the potential for cave-ins.

In addition to stepping up inspections, OSHA is also using another enforcement tool to decrease the danger on jobsites — and thus big fines. For example, in November, OSHA cited a Boise, Idaho contractor for trench violations, and fined the company more than $106,000 after OSHA inspectors found workers in 7-foot-deep trenches with no cave-in protection or safe means of egress. Also last year, the agency fined a South Dakota contractor $95,000 for allegedly not conducting regular inspections, which OSHA said led to a non-fatal collapse in 2017.

However, those two cases pale in comparison to the nearly $1.5 million the agency fined a Massachusetts utility contractor, Atlantic Drain Services, after two workers were killed in an October 2016 trench collapse. In addition to the huge fine, company owner Kevin Otto was arrested and charged with two counts of manslaughter.

The levying of criminal charges is a relatively new direction for authorities in an industry that seems to accept dangerous conditions as part of the job.

A deadly New York City trenching accident led Manhattan District Attorney Cyrus R. Vance Jr. to form a construction fraud task force that focuses not only on safety but on other illegal industry acts. Since then, Vance’s office has successfully prosecuted safety and fraud-related crimes, including securing the conviction of Harco Construction, the general contractor overseeing the project where 22-year-old Carlos Moncayo died in a trench collapse in 2015.

Why Every Employer Should Have an Employee Handbook OSHA Announces Enforcement Policy for Failing To Electronically Submit Required...
Scroll to top