You are here: Home1 / Blog2 / Business3 / How to get payment from slow-paying general contractors 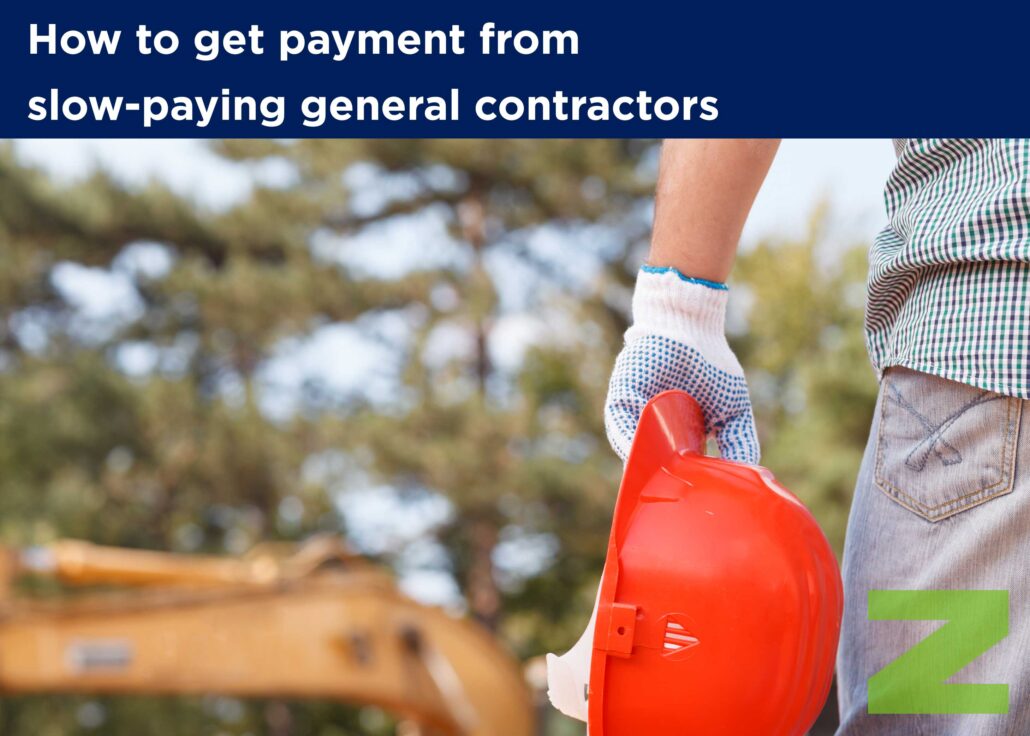 The Dotted Line: How to get payment from slow-paying general contractors

When it comes to funding labor and material costs for any given construction project, subcontractors are usually left with the lion’s share. Everyone in the chain of command typically understands that invoices should reflect all work approved and completed to date and be submitted in a timely manner so that those responsible for bearing the costs can stay cash buoyant.

But what happens when payment for those invoices slows or stops altogether?

When general contractors aren’t timely in their payments, subcontractors can sometimes not have cash flow to pay their suppliers and workers, which could play havoc with project schedules and potentially devastate the business.

Construction legal experts say there are actions subcontractors can take through the lifecycle of a project that can make collecting their money easier.

There are terms related to payment in all standard forms of construction agreements and being able to negotiate them before the contract is executed can help avoid payment problems later on.

The first opportunity a subcontractor has to influence how payments will be made, said attorney Quinn Murphy, who specializes in construction at Sandberg Phoenix in St. Louis, is to try to negotiate favorable progress payment and retention terms before signing the contract. Retainage is standard industry practice that involves the withholding of up to 10% of a subcontractor’s invoice amount.

“There’s no reason why the general contractor shouldn’t be required to pay you when you hit certain milestones like substantial completion,” he said. Since retainage is meant to ensure that subcontractors live up to their obligations under the contract, the need to withhold retainage should be reduced the further along the sub gets into a project.

It’s worth noting, though, that some states, such as California, have ruled that pay-if-paid clauses are unenforceable.

But even having a pay-when-paid clause in the contract doesn’t mean having to wait indefinitely for payment.

“Usually a pay-when-paid clause works to set some reasonable time for payment but doesn’t work to bar payment indefinitely,” said Nathan Budde, chief legal officer and general counsel at Levelset, a payments software platform. “At some point, the reasonableness elapses and there needs to be payment made no matter whether the money has been received [by the general contractor] or not.”

Those rules differ from state to state as well.

Know when to use a mechanic’s lien

Another provision that could help avoid future slow payments is one that entitles the subcontractor to the fees and costs associated with trying to collect past-due amounts. Although that would only kick in if the subcontractor wins a judgment in court, Murphy said, the fact that it’s “hanging out there” might be enough to make general contractors a little more conscientious about making timely payments.

“I think the mechanic’s lien is the most powerful [collection] tool,” said Budde, “but it’s not necessarily the only tool. A mechanic’s lien is really the nuclear option. Nobody really wants to be in a position where they have to file it, and once it gets filed … it’s not beneficial to the relationship between the sub and the general contractor, the general contractor and the owner or the sub and the owner.”

Not only does a mechanic’s lien, which is an encumbrance on the project property, keep the owner from selling or refinancing, it also often forces the general contractor to release that lien within a certain, usually brief, time period by either paying the amount claimed in the lien or by posting a bond that substitutes as security for payment.

Of course, the ultimate enforcement action after filing a mechanic’s is foreclosure on the property.

“Whether you are ultimately foreclosing on the property or you’re going against a mechanic’s lien release bond,” said attorney Justine Kastan with law firm Rutan & Tucker, “in either case it gives you a pretty tangible form of security for your claim.”

In some cases, the realization that the general contractor hasn’t paid some subs, Budde said, could prompt the owner to pay subcontractors directly.

But before subcontractors consider enforcing their rights under mechanic’s lien laws, they must make sure they have met the statutory notice requirements. In Florida, for instance, in order to secure lien rights, any company providing labor or materials to a project must notify the owner within 45 days of first doing so.

That’s just one of the many steps a contractor must take before filing a lien in Florida. Again, exact procedures differ from state to state.

It is so important, Budde said, for contractors to verify lien laws and their requirements before taking on work in new states. ”It’s definitely worth doing some research into what needs to happen there, or partnering with somebody who can help with providing that type of insight,” he said.

Use state law to your advantage

Another way to recover money, Murphy said, is to bring an action under the state’s prompt payment laws.

“I think oftentimes subcontractors don’t understand how powerful of a tool this can be,” he said.

What makes state laws so robust is that there are typically stringent interest provisions baked in. For instance, in Missouri, Murphy said, the plaintiff is entitled to attorney’s fees and 18% interest on sums not paid in accordance with the contract terms.

Prompt payment laws can also dictate other payment terms related to construction contracts. Illinois, for example, recently passed a law prohibiting customers from withholding more than 10% retainage from contractor payments and requires retainage to be reduced to 5% once the contractor has completed 50% of the contract. The change applies to all construction contracts — prime contract or subcontract.

About 20 state legislatures have capped the retainage that can be held on private contracts at 10% or less. New Mexico does not allow any retainage to be withheld from construction payments.

Contractors, he said, should be on the lookout for changes to laws so that they can make sure they’re being paid appropriately and participate when there’s a push to amend the laws.

Keep calm and be respectful

Through the entire project, even if there are payment disputes, Kastan said, it’s important that contractors remain calm and deliberate in their communications.

“I think the best and most important thing [for subcontractors] is to maintain a good relationship with general contractors,” she said.

Also, if the slow-pay situation ends up in litigation, Kastan said, emails and other communications could end up as exhibits, just one more reason to keep things respectful.

To that end, she said, it might be a good idea to bring in someone not from the company who isn’t emotionally wrapped up in the dispute to lead communication in the collections effort.