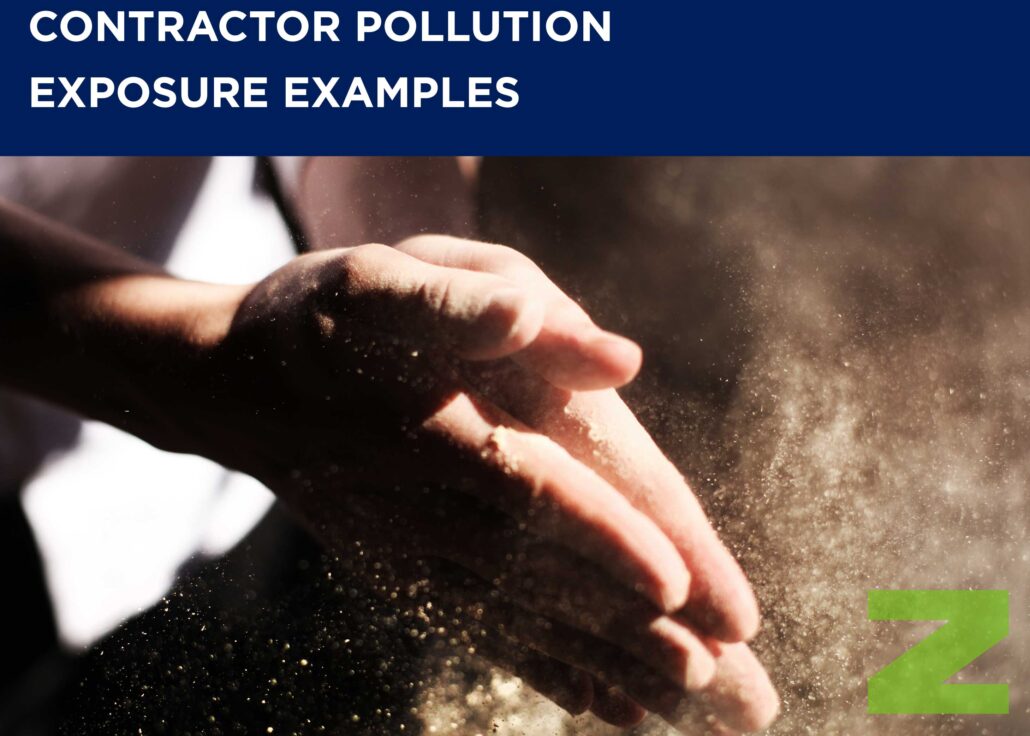 A Subcontractor is hired by a General Contractor to

land. During the initial clearing/grading phase, the

occurs for a one week period resulting in runoff of silt/

sedimentation to an adjacent property and stream. This

results in a monetary award to the adjacent property owner

for property damage/loss of use and State Agency civil

penalties for silt/ sedimentation run-off into the stream.

A General Contractor is hired to construct a building in an

urban area. During excavation activities at the construction

site, dump trucks are loaded with dirt to be hauled to a

nearby construction site for fill. The dump truck operators

opted not to utilize their truck tarps during transit because

the receiving facility was roughly three quarters of a mile

from the subject site. The trucks pass by several residential

homes on the way to the receiving facility.

is subject to inhalation of the dust coming from the dump

and is losing her hair. Her parents take her to the hospital and

she is diagnosed with toxic, heavy metal poisoning. The

originating construction site is contaminated with Thallium, a

heavy metal, and the inter-facility release results in monetary

A Subcontractor is hired by a General Contractor for site

development and grading of a former gas station site to be

redeveloped into a fast food restaurant. During grading

at the site. The grading activity spreads the once isolated

contaminated soil over the entire site, thereby resulting in

significant costs to remediate the contamination.

his property during the associated remediation activities.

A General Contractor is hired by a commercial building

owner to renovate an existing building in phases. During the

fibers into the ambient air within the building. Tenants of the

building in adjacent areas to the renovation are notified and

asked to evacuate. This results in third-party damages for

and allegations of bodily injury resulting from asbestos

A General Contractor is hired to construct a mixed-use

building. During the construction activities, the General

of the buildings windows and doors. Five months after the

certificate of occupancy is issued for the building, heavy

rains infiltrates into the exterior wall cavity of the building

resulting from the improperly installed flashing, which is

followed by associated mold growth. This results in significant

defense expenses, as well as costs for third-party bodily injury

A General Contractor is hired to construct a hotel. The

project is near completion when it was discovered that an

air handler unit needed to be installed on the top floor. The

unit is too large for to fit through the designated opening, so

to allow installation of the air handler. The General

Contractor takes precautions to prevent any rain water from

entering the building during the installation, but a heavy rain

event overwhelms their water prevention controls and the

condition in the building. This results in significant costs to

A General Contractor is hired to renovate a structure. During

the construction, concrete is demolished and the General

concerns by identifying intake vents that could possibly be

affected by the work, and those portions of the HVAC

system are turned off. Due to a breakdown in

communication between the General Contractor and

owner/property manager, as well as between the owner/

property manager and other third-party vendors, a third-

party vendor arrives at the site and turns the dormant HVAC

units back on, thereby spreading concrete dust into the

remainder of the building. Concrete dust can contain

harmful amounts of silica. This results in third-party damages

A General Contractor is hired to renovate a structure around

on-time and within budget. During the final walk through, the

Unfortunately, a building occupant has an adverse reaction

to the chemical cleaner and suffers injury harmful reaction.

This results in legal defense expenses, the need to bring in an

An excavation/grading contractor is hired to install a new

petroleum storage tank causing a release into the

surrounding soil. This results in remediation costs and third-

A utility contractor is hired to upgrade sewer lines in a